Hydronic system
for the 4 stars hotel with thermal center

The hotel is the result of the recent acquisition by Aeroviaggi, which is the first tour operator for beds in Sicily and Sardinia. The operation, which restores the historical hotel complex of Playa d'Himera taken over by Bnp Paribas with an investment of 12 million euros, brings to 14 the facilities managed or owned by the Sicilian company chaired by Marcello Mangia, which in 2016 renovated the Pollina Resort ex Valtur.

149 rooms in the Club for a total of 400 beds and 60 people employed. Throughout Sicily Aeroviaggi employs 1050 people.

The renovation of a hotel that has a thermal center is not easy from an air-conditioning point of view.

The air-conditioning system has to satisfy the contemporary request of cold for the rooms, heat for the thermal centre and sanitary hot water. In traditional installations, these requests are satisfied by several units with high first investment and management costs and big spaces for the installation are necessary.

The challenge was to satisfy those requests reducing installation and management costs, removing the old thermal center with natural gas boiler.

Another important element was the acoustic comfort: maximum silence to grant total comfort to clients. 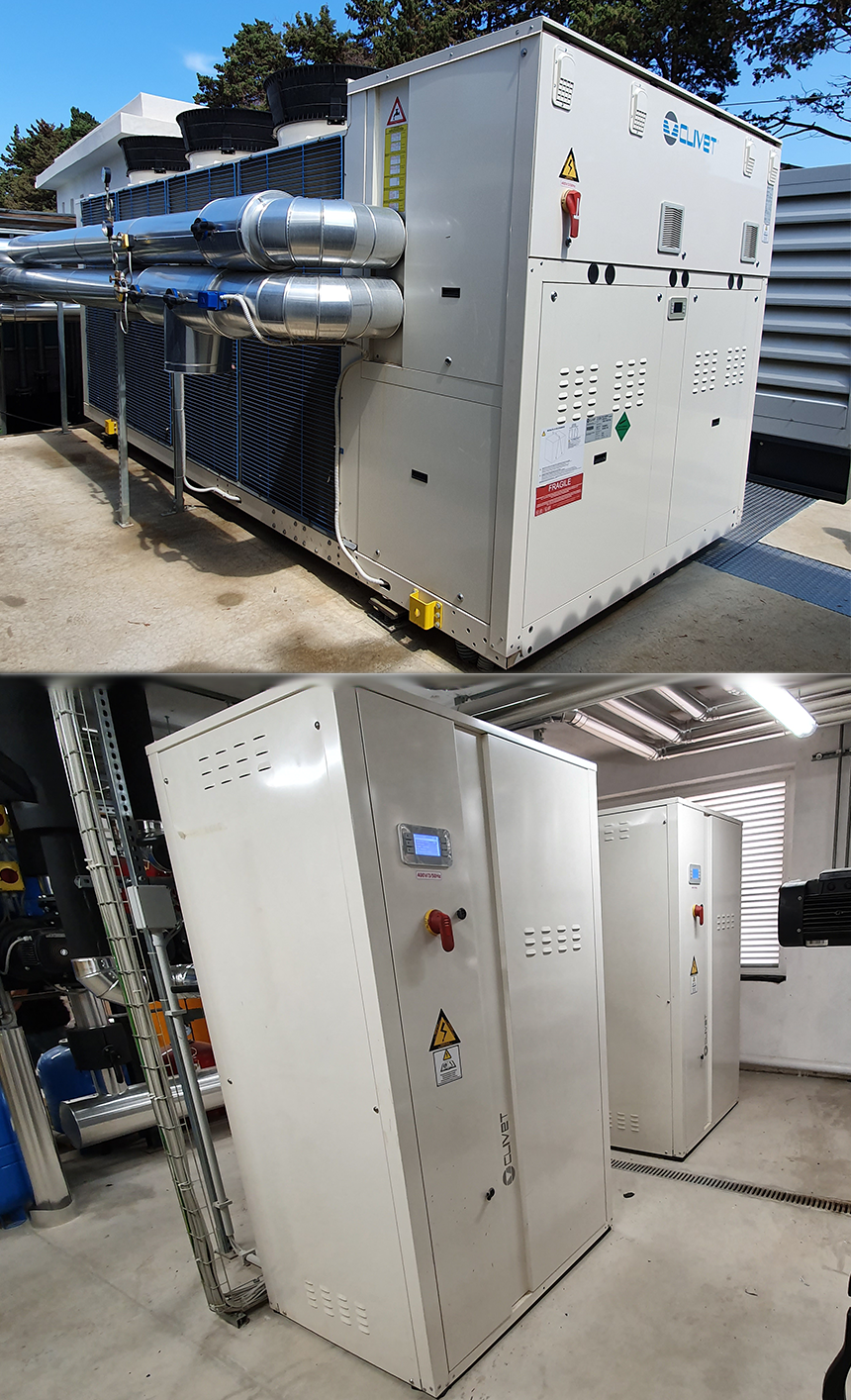 Multifunction reversible heat pump ELFOEnergy Magnum MF (WSAN-XEM MF 100.4) has all the necessary elements for the air-conditioning installation as it can produce heat, cold at the same time and independently. With the energy recovery reversible heat pump technology this unit can satisfy every request of cold water, heat water with high energy efficiency and automatically employing renewable energy without combustion local emissions. The acoustic super silenced configuration allows the maximum silence.

The installation is completed with the water -water ELFOEnergy Ground Medium 2 (WSH-XEE2 60.2), which stands out for compactness, silence that is used for the very high hot water production.

The ELFOEnergy Magnum multifunction heat pump manages the air-conditioning of the hotel in winter and in summer with the primary side, meanwhile the recovery side heats at 45°C during all seasons with a tank of 5 m3.

The ELFOEnergy Ground Medium2 unit works like a heat pump booster that increases temperature up to 70°C. Through an intermediate exchanger can supply other water tanks with a total volume of 20 m3 for the different thermal destinations.

The system guarantees the different requests of cooling, heating and domestic heat water production of the hotel in a contemporary and independent mode, reducing management costs, initial investment and central thermal space.

Even acoustic comfort request is satisfied for this high-level hotel.