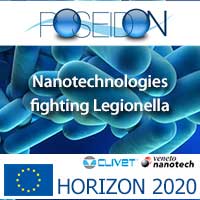 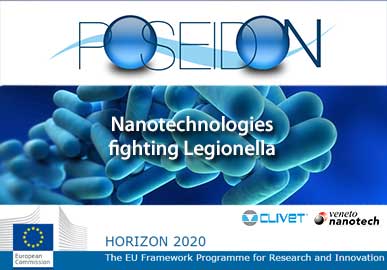 Sustainable comfort, air quality, human and environment wellbeing are the principles of all Civet production of high efficiency and low environmental impact heat pump air conditioning and air handling systems, which use renewable energy as energetic source. The centrality of fresh air in spaces in which we live, led Clivet to adopt innovative technologies such as electronic filtration active on smoke, fine dust, particulates PM10, PM2.5, PM1, bacteria and viruses.

Legionella, a bacterium very dangerous to human health, is transmitted by aerosol flows and contaminated water, as in air-conditioned spaces, or through humidifiers, reproducing itself overall in humid and warm places. It is an element of risk for all situations in which many people stay in the same place, such as in nursing homes, hospices, hospitals, swimming pools, spas and other public building, where an air conditioning, humidification, air treatment or water recirculation system is operating.

Clivet, following its mission, is involved, as a project coordinator, in a three year project to fight Legionella funded by the European Union HORIZON 2020 program for research and innovation. The scientific coordinator is Veneto Nanotech, the Italian district of nanotechnology.

Differently from standard microbiological methods, that needs several days to detect the pathogens and are based on in-vitro selection of bacteria executed by specialized personnel, the new platform will ensure a fast detection and analysis, assuring to detect Legionella in few hours and being able to proceed immediately with the countermeasures of disinfection of the plant and control of persons exposed to the pathogen. The system will be completely automatic and will eliminate the risk of infection faced by the staff in charged of the analysis. The size of the new device will be reduced so that it can be integrated in air conditioning and water distribution systems.

In this ambitious project, officially launched on January 19th, 2015 with the kick-off meeting held at Veneto Nanotech, Clivet will be responsible for implementing, testing and monitoring the new devices in order to demonstrate, through practice, their real functionality and applicability.